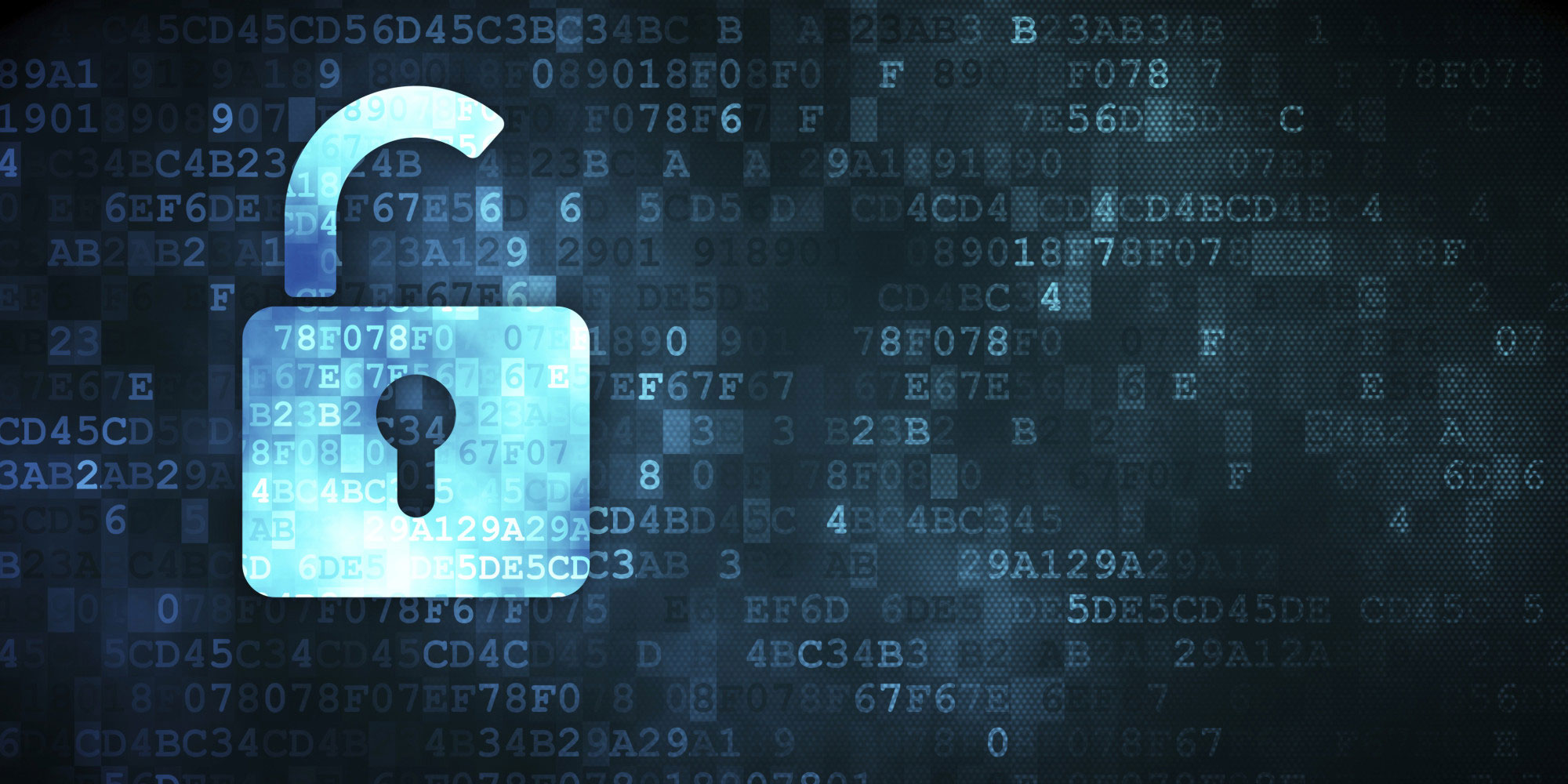 I outline how the decision to change from HTTP to HTTPS is not as black-and-white as you'd think, despite the obvious Google ranking benefits.

Beginning in August of 2014, Google announced that HTTPS would become a minor ranking signal. Therefore, transitioning your site HTTPS (adding a SSL 2048-bit key certificate) will give you a minor ranking boost. However, while switching to HTTPS for SEO may be beneficial to rankings, is it the right decision overall for all sites?

The short answer is, maybe it is and maybe it isn’t. That’s a typical SEO’s answer for you, right? Hedging both sides.

HTTP vs HTTPS: The background

At the point when Google announced HTTPS as a ranking factor, they’d been moving towards security in a lot of ways. In fact, they’ve been fully encrypting their own search results since 2013.

[su_quote]Security is a top priority for Google. We invest a lot in making sure that our services use industry-leading security, like strong HTTPS encryption by default. That means that people using Search, Gmail and Google Drive, for example, automatically have a secure connection to Google.

Beyond our own stuff, we’re also working to make the Internet safer more broadly. A big part of that is making sure that websites people access from Google are secure. For instance, we have created resources to help webmasters prevent and fix security breaches on their sites.

We want to go even further. At Google I/O a few months ago, we called for “HTTPS everywhere” on the web.[/su_quote]

In short, they want all sites to be secure – whether the site is accessing sensitive information (such as a bank) or not. Here’s the HTTPS Everywhere video where they elaborate on that point.

HTTP vs HTTPS: The signal

Google has said that HTTPS gives websites a small ranking benefit, only counting as a “very lightweight signal” within their overall ranking algorithm.

The HTTPS component of the algorithm runs is real-time and works on a per-URL basis. This means that Google can process the switch to HTTPS quickly and that the benefit can be observed on individual HTTPS pages even if all of pages of a site are HTTP.

They have also said that secure sites carry “less weight than other signals such as high-quality content,” and that based on their tests, the update impacted “fewer than 1% of global queries.“ They also said they have seen “positive results” in terms of relevancy and ranking in Google’s search results.

How strong is it now? Google’s Gary Illyes elaborated on that in the following conversation with SEO journalist Matt Southern:

@MattSouthern more like a dealbreaker. All other signals being more or less equal, it gives a page the edge needed to top the other result

In fact, they’ve said they “may decide to strengthen” the signal at a later date to help “encourage all website owners to switch from HTTP to HTTPS to keep everyone safe on the web.”

Many SEO’s were skeptical at the time although some have since softened their stance.

According to The HTTP Archive, the HTTPS announcement by Google led to a 3% increase in secure websites as of January 2015.

I myself remain skeptical of moving a site from HTTP (unsecure) to HTTPS (secure) purely for SEO purposes.

Well, it’s a simple question of if the benefits outweigh the risk.

Don’t get me wrong. I absolutely believe in protecting the privacy and sensitive information for users in general. That’s not at the heart of my skepticism.

HTTP vs HTTPS: The problems

For small sites, maybe moving from HTTP to HTTPS is as simple as attaining your SSL certificate, making some quick modifications, and you’re on your way.

If you’re working on a larger site and/or a larger brand, any major change in structure (in this case every URL) is a complex undertaking fraught with potential pitfalls.

In the case of HTTPS, you’ll have to ensuring that you:

You get the point, there’s a lot that could go wrong quickly. With larger and more complex organizations, getting your ducks in a row may take a lot of time and effort, and it may not happen all at once.

While it’s possible that everything could go off without a hitch, it’s unlikely.

What you have to ask yourself is this:

Do the benefits of moving to HTTPS outweigh the cost of implementing correctly?

If you’re moving to HTTPS for SEO purposes only, then probably not. Some evidence to this point has shown that the SEO gains of going secure have been small.

If you’re doing it for alternative reasons (such as to protect customer information), then maybe the benefits do outweigh the risks.

HTTPS pages are much slower than their HTTP counterparts

Site speed is not something that is widely talked about in relation to HTTPS, but it should be a significant consideration when moving from an HTTP site to HTTPS.

All of the extra communication between browser-and-server just takes more time.

To illustrate this point, I’ve run some small controlled load tests on a client’s website that had both HTTP and HTTPS versions of all pages.

Additionally, when testing pages using Google’s Page Speed Insights tool, even the tool scored the HTTPS counterparts lower – even though there was nothing else different between each page. 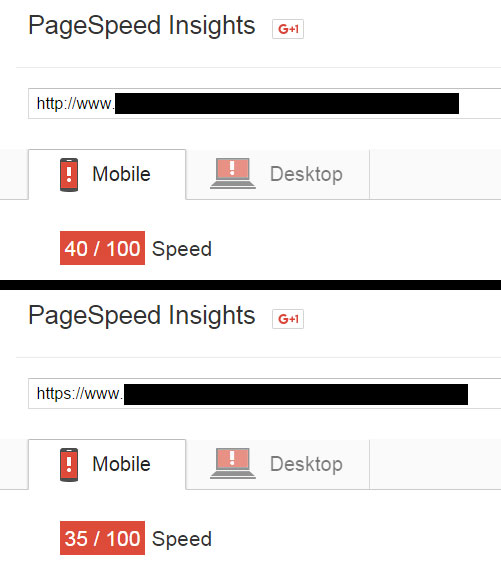 I found this to be quite surprising as many in the industry have played down the speed ramifications of moving to a secure site.

They thing you have to ask before flipping the switch to HTTPS is, can your site withstand a 23-33% degradation in speed?

If it’s a site that doesn’t depend heavily on e-commerce for revenue, then maybe it can sustain after the speed is decreased.

However, if user experience is a significant component of conversion, then losing that much speed could have huge negative ramifications to bottom-line revenue.

Some recent case studies have shown a very high correlation between site speed and revenue:

Again, not saying that you shouldn’t go to HTTPS, just saying the decision is more complex than just the potential SEO benefits.

Will the HTTPS ranking signal become stronger over time?

It’s likely that it will – at least that’s the way the things are going.

If you try to read the tea leaves coming from comments made by folks at Google, it’s likely only a matter of time.

Here’s some of the evidence.

1. At a technical session at SMX Advanced in July 2015, Google’s Maile Ohye took the opportunity to evangelize the benefits of HTTPS.

Good time to see if you can go HTTPS too.

3. Gary Illyes has been quoted as saying many things relating to HTTPS that make me think it will become a stronger factor over time including:

Being quoted as saying the following about HTTPS at the SMX Advanced conference this summer: “It’s my baby.”

If you’re an SEO and you’re recommending against going HTTPS, you’re wrong and you should feel bad.

Though I see what he’s doing, I personally think this statement is a little much as it doesn’t really take into account the individual situations and reasons why an SEO might make such a recommendation.

He also said the following in a video chat with Bruce Clay:

[su_quote]I hope that I see more and more websites on HTTPS because I think that privacy, for example, is important, but of course I can’t expect everyone to go HTTPS. Some people don’t have the resources for that. Some people just don’t want to do it for reasons … I don’t know.

It’s important in general, but if you don’t do it, it’s perfectly fine. If you’re in a competitive niche, then it can give you an edge from Google’s point of view. With the HTTPS ranking boost, it acts more like a tiebreaker. For example, if all quality signals are equal for two results, then the one that is on HTTPS would get … or may get … the extra boost that is needed to trump the other result.[/su_quote]

How much stronger will it get, only Google knows?

But unless it gets significantly stronger, I think the above considerations will still have to be made.

That said, I’d bet dollars to donuts that at some point next year they will increase the weight of the signal.

[su_note note_color=”#EFEFEF”]Update (12/17/15): This theory is further strengthened by this report that Google will begin to index HTTPS pages first over HTTP pages when possible.[/su_note]

[su_note note_color=”#EFEFEF”]Update (1/28/16): More evidence to support that the HTTPS signal will be strengthened at some point (probably this year). Google has updated their Webmaster Guidelines and have added the following around HTTPS: “If possible, secure your site’s connections with HTTPS. Encrypting interactions between the user and your website is a good practice for communication on the web. ”[/su_note]

Should you go HTTPS?

The point of this article was to say that there is a lot more to consider than just changing to HTTPS for SEO purposes.

There is so much that can go wrong that I’d recommend putting extreme emphasis on doing it right rather than trying to flip a switch and do it quickly just for potential SEO gains.

I’d generally recommend that at some point in the near future, you should begin to plan for a switch to HTTPS. But if you do, do it right!

It should be an all-around business decision and not just an SEO decision.

If you put that lens on it, then you’re likely to be successful.

If you put the SEO-only lens on it, then you’re probably not going to get exactly what you’re expecting.