Google Accelerated Mobile Pages: Great for users, not practical for traditional sites (yet) 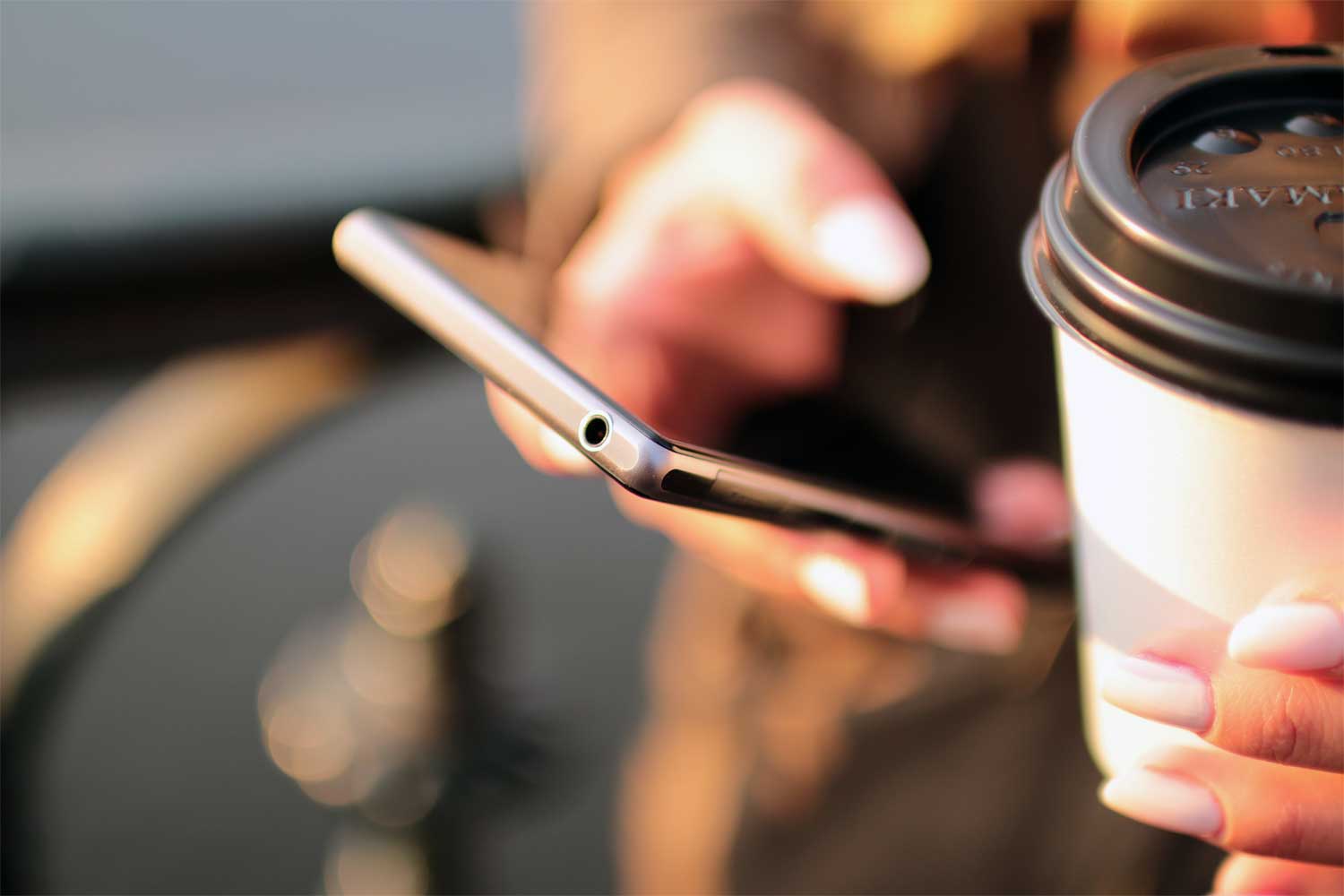 Unveiled in collaboration with over 30 other publishers (including Twitter, Pinterest, WordPress, Chartbeat, Parse.ly, Adobe Analytics and LinkedIn), this project is geared towards dramatically improving the performance of the mobile web (making content much faster than it does today).

Essentially, they want to utilize the new AMP publisher framework to help complex webpages with rich content such as video, animations, graphics, and ads to be able to load instantaneously.

Additionally, they hope to enable the same code to work across multiple platforms and devices so that content can appear everywhere in an instant—no matter what type of phone, tablet or mobile device people are using. The effort is very similar in focus to that of Facebook Instant Articles and Apple News.

Publishers such as Vox, The Verge, BuzzFeed and the Washington Post are already live as the earliest adopters of the new AMP pages.

AMP’s in the wild

Google has been kind enough to create a special version of search results that people can use to see AMP-enabled search (http://g.co/ampdemo). Note: It only works for searches on your mobile device.

If you go to that link on your smartphone you’ll see what looks like the typical Google home page. However, in this version you’ll see a prompt that tells you it’s an AMP-enabled result.

A search for “democratic debate” returns a carousel of articles at the top and article listings below. Clicking on the articles in the carousel — the US News article, for example — brings up the post (I kid you not) almost instantaneously from the bottom of the screen.

Additionally, users will notice that the article loads within Google as opposed to launching within the actual website itself – which occurs with non AMP links on the search results page.

As for the articles listed below the carousel as well as the traditional SERP results, the load time seems on par with regular search, these are not AMP-enabled. If there aren’t AMP pages in the results, you won’t see the carousel.

Here’s another example of counterpart pages from WordPress – one traditional and one AMP-enabled.

According to a KissMetrics study, if an e-commerce site is making $100,000 per day, a 1 second page delay could potentially cost $2.5 million in lost sales every year. That’s huge!

Improvements in site speed may lead to SEO ranking benefits

Though it is not clear if enabling AMP pages will be directly beneficial to SEO, the indirect benefits of improving site performance could allow sites with AMP enabled to receive a benefit in rank performance in mobile searches.

User experience and site speed have been a significant focus for Google over the years, and it has been a part of Google’s natural search algorithm since 2010.

This is confirmed. According to Google, AMP pages are likely to receive a ranking boost and may even be labeled as “fast” in mobile search results.

This has the most potential to draw a significant number of clicks simply due to the prominence of the news carousel within search results.

The AMP-enabled results are purposely above-the-fold where they are easy for mobile users to click and consume.

Per the above, Twitter has found that making articles faster in our apps has resulted in their users reading more content from Tweets.

In fact, Twitter has found that making articles faster in our apps has resulted in their users reading more content from Tweets.

WordPress is making it easy to adopt
Wordpress already has a plugin which should help you to enable AMP content on your blog. I’m planning to try it out myself soon.

Why it’s not practical

Maybe this is me just not knowing enough about the way it’s coded, but is it an “all or nothing” deal? Does every element of the page have to be AMP-compliant or can some things not be. For example, pages can be “mobile-friendly” according to Google, but may still return mobile usability errors.

Google is beginning to clear this up. They’re slowly but surely releasing information through various news outlets including early AMP adoption/progress, how to implement and validate AMP pages, and some webmasters have begun to detect updates to Google’s schema article markup and structured data testing tool.

A new report was added to the Google Search Console under the Search Appearance tab for AMP errors and have also added some additional documentation around the technical creation of AMP pages.

While Google does provide a demo, timeline for AMP-enablement in traditional mobile search results remains unclear. Therefore, it is unclear when sites will receive the value-add of going with AMP’s, meaning that it might be a lot of work for little payoff (for a little while).

Google has announced that it plans to support fast-loading AMP’s within Google search “early next year,” probably in February 2016.

Google Is To Launch AMP In Search Results On February 24, 2016 according to SEL and Ad Age.

Maybe AMP’s are geared more towards content-heavy blog articles or similar publications, and applying the logic to traditional sites was never the intent. That remains unclear. Even so, applying the AMP methodology to more traditional page types may prove difficult for a lot of reasons (see below).

When developing AMP technology, the decision was made to disallow the use of JavaScript by and large. While this certainly helps speed, it is likely to prove impossible when trying to apply the framework to pages dependent on JavaScript to function – which is most standard websites.

Additionally, if trying to apply AMP HTML to an entire site (rather than page) this would require a complete overhaul of a site’s coding framework which could be incredibly labor-intensive.

Although AMP has said it can be used in responsive, the stripped down nature of the pages may not play well across desktop and mobile (the core “on size fits all” coding benefit of responsive).

Thus, using AMP may unforeseen difficulties when trying to project to an entirely responsive setting – and not just individual articles or pages, and it may result in the need to create/maintain alternate versions of every page, as well as alternate code-bases. Not ideal!

AMP is likely to lead to duplicate content issues with SEO

Based on what I’ve researched, the use of AMP pages on mobile-devices may necessitate the creation of two unique pages.

In my experience, managing duplicate content is difficult for larger organizations.

Additionally, it is also unclear how Google would determine when/how to use/index the AMP vs. standard version of the page.

This has been made a little more clear in testing WordPress AMP plugin. It looks as if there is a amphtml link rel tag on the primary article page to denote the AMP page, and the AMP page then canonicalizes back to the main article page.

Example for this page:

“Light” versions of pages may negate any speed-related conversion advantages

For example, the WordPress.com AMP example featured both an AMP-enabled page and a standard page – which were drastically different from a user experience perspective.

Do the AMP-enabled pages convert better when they’re stripped down? On a blog post maybe, but how about on a traditional website? Maybe not.

There are significant limitations with respect to analytics tracking capabilities

Although it is likely evolve, this version of AMP HTML looks to involve significant limitations with respect to analytics tracking capabilities. There is some ability to track using a “Tracking Pixel,” but trying to apply something as simple as Javascript-based analytics may not be possible.

Tracking and analytics still appears to be a liability of AMP pages. However, there does appear to be indications that some analytics vendors are beginning to work to support AMP including comscore, as well as chartBeat, Google Analytics, and Parse.ly.

There is now some documentation beginning to be built out on GitHub relating to analytics usage and API’s for AMP’s, but it is still relatively unclear how their new tagging structure will work with existing analytics solutions. To date, the solution still appears to be unfinished.

Preliminary end-to-end testing for publishers and analytics vendors is expected to start in late December, with full testing happening in mid to late January. In addition to the analytics partners mentioned above, Nielsen, Adobe Analytics, and ClickTale have expressed their intention to support AMP in 2016.

There does not appear to be much support for 3rd-party ads in the current version of AMP. As many publishers depend on online ad revenue (which itself is often dependent on Javascript), this is a serious liability.

This will limit publishers abilities to monetize their content, which could lead to slower adoption of AMP until ad serving capabilities are enhanced.

Google has announced that several advertising platforms including OutBrain, AOL, OpenX, DoubleClick and Adsense are working within the framework to improve the advertising experience for users, publishers and advertisers on the mobile web.

The folks over at the AMP project have announced that there will be at least basic support for ads when Google integrates AMP pages into results in February 2016. According to the site, “When AMP launches on Google Search in February, it will include important, basic functionalities. These include the ability to traffic ads with ad servers of your choice, support for multiple demand sources and formats (including native ads), full control over ads placements, and viewability measurement. It also includes integration with 20+ ad tech vendors, all of whom are excited to participate in the AMP initiative…” This is good news for publishers.

AMP example pages did not score well on mobile according to Google’s Page Speed tool (WTF?!?)

Take this for what it’s worth, but the page I tested scored a 75. 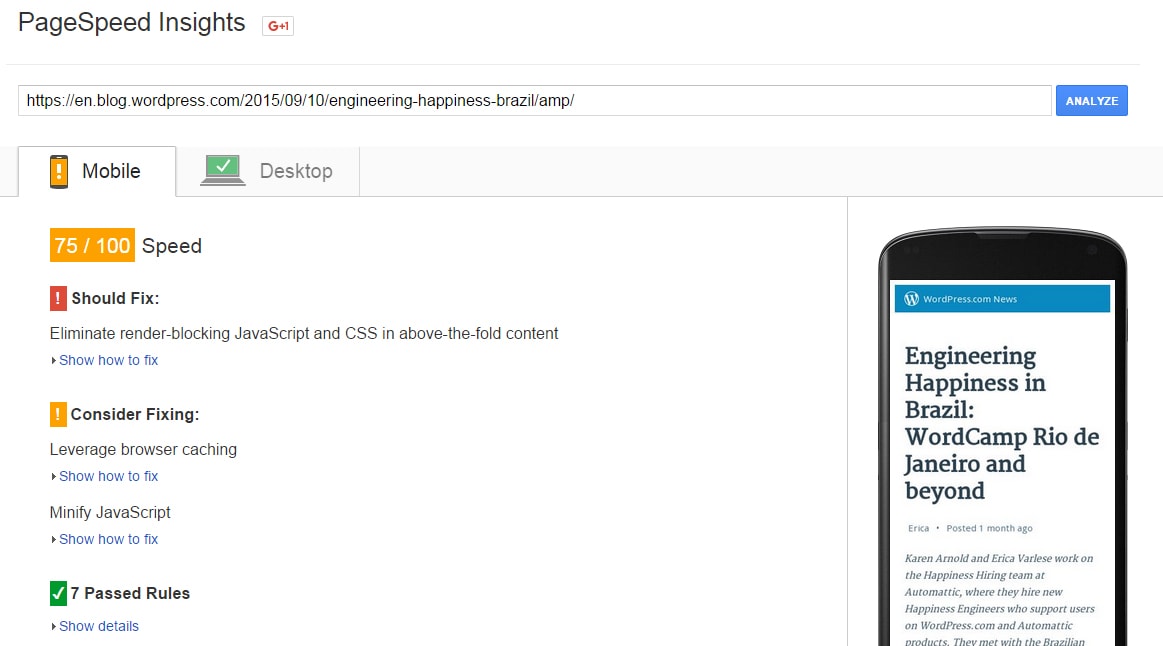 This indicates one (or all) of the following:

Accelerated Mobile Pages seems like – and are – a great idea. However, there are a lot of logistical challenges that they’ll have to work on before these can become more mainstream than blog post page types.