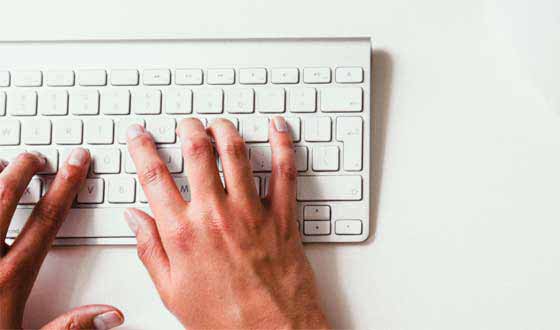 Ever wonder what an organic click might really be worth? For that matter, ever wonder what is the number of clicks you might gain by moving from position #5 to position #1 in the search results?

What if I told you that there was information out there that might be able to help you predict just how many organic clicks you may stand to gain by moving up in search engine rankings? Well, it’s your lucky day.

There are 3 data sets & studies currently in existence to help us understand traffic distribution by SERP position: 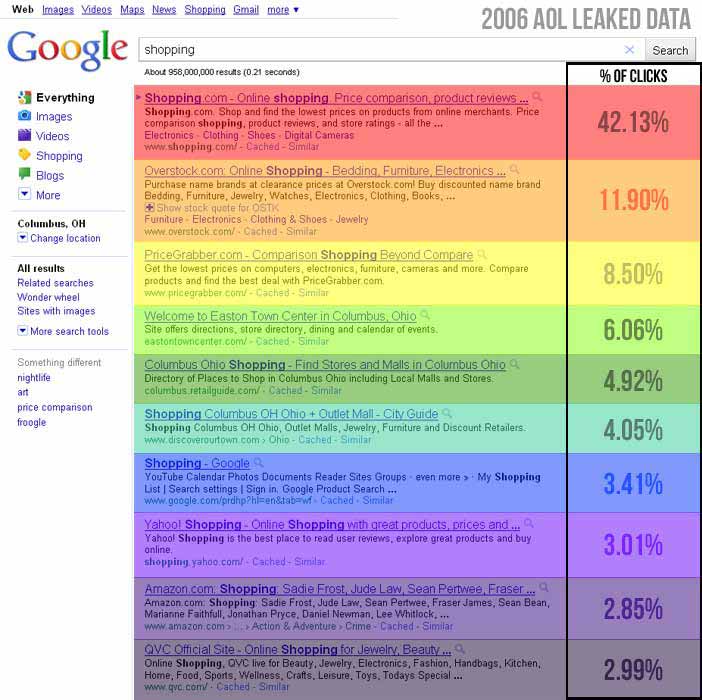 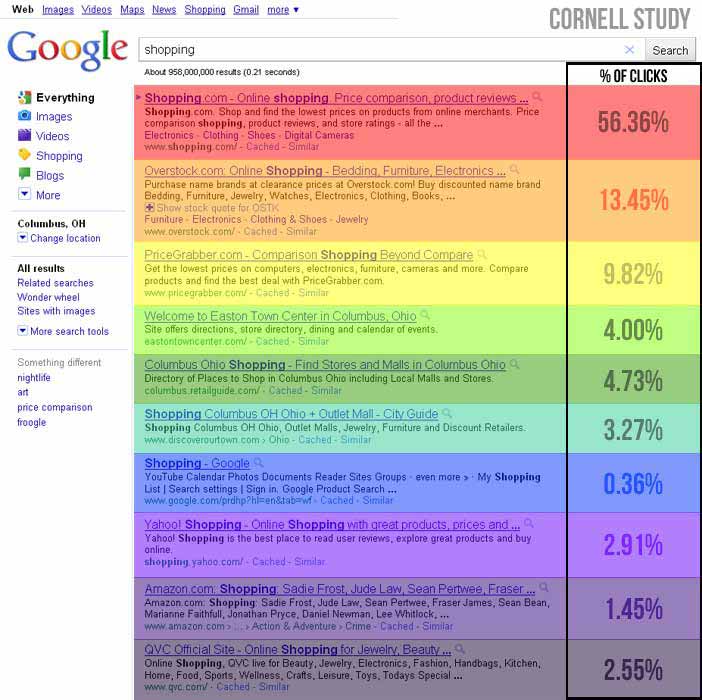 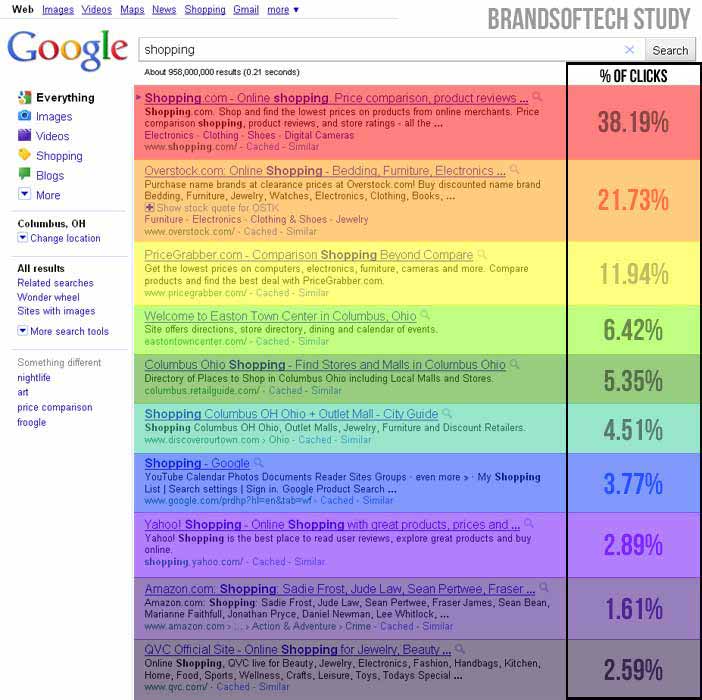 By looking at each individual study, you can easily see that there is a great disparity in terms of the number of clicks the #1 result receives versus #6 or #10. This is to be expected. AOL’s data also showed that 89% of people clicked somewhere on page one, while Cornell’s users click page one results 98%, and BrandSoftech’s users click page one results 99% of the time.

By my reasoning, I believe that none of the 3 data sets referenced above is 100% accurate. In fact, each data set has it’s share of flaws. However, I believe that the real click distribution percentage for clean SERP pages (you’ll see muddy SERP pages referenced below) likely falls somewhere in between all three studies.

So, I took the liberty of average all 3 percentages together to come up with a new mark:

Please keep in mind, that this is NOT an exact science. This is only a way of attempting to estimate the percentage of click volume you may receive based upon SERP position.

The idea here is that you can utilize both your rankings data and keyword search volume data to determine:

Okay, let’s show an example. For keyword research, I recommend using the dating social network. I sometimes question the accuracy of this tool, but it’s free and easy to use – and also allows you to export data via excel. This data can show you monthly search volume trends on a keyword level.

Lets go ahead an just knock off about 20% right now due to the click volume that will probably go to Pay-Per-Click ads. That leaves us with approximately:

Based on the click distribution percentages above, you might expect approximately the number of clicks displayed below if you rank in the Top 10 SERPs for the keyword “shopping”:

Personally, I recommend using the Local Search Volume as your primary area of focus unless you’re a very well-known worldwide brand. So if we go by the above logic using the Local Search Volume numbers, you can expect that if your site moves from the #5 organic position (which receives 200,000 clicks monthly) to the #2 organic position, you should get a monthly increase in organic traffic of around 427,733 clicks.

Lets use the above example, and really roll with it into conversions. Let’s say your website’s conversation rate is 2%, and you’re currently ranking #5 for shopping which we think pulls 200,000 local clicks monthly. Each conversion for your company is worth $200.

At the #5 ranking, your site should be generating 4000 conversions per month which equates into $800,000 monthly.

Please, before you get excited I want you to keep in mind, all of this is approximate. This logic does not occur in a vacuum, and will most likely happen on a MUCH MUCH smaller scale for most examples. But in the end, this should serve as a good starting point from which to begin to understand how apply the data points that we are aware of to understand how shifts in your organic ranking may affect your organic traffic.

The Flaw in the Logic

As I said above, there are several flaws in the logic I stated above.

Different types of top free dating sites in canada is discussed in detail by Aaron Wall over at SEOBook. These types are Navigational, Transactional, and Informational.

Different search contexts certainly impact the patterns in which people click around the SERPs, which in turn may affect the click distribution percentages.

The concepts discussed above occur in the vacuum of a clean search results page. However, we know different. SERPs are muddied with local listings, inject with news feeds, social media, pictures, media, etc, not to mention the 10-20% slice the pay-per-click ads take right off the top. 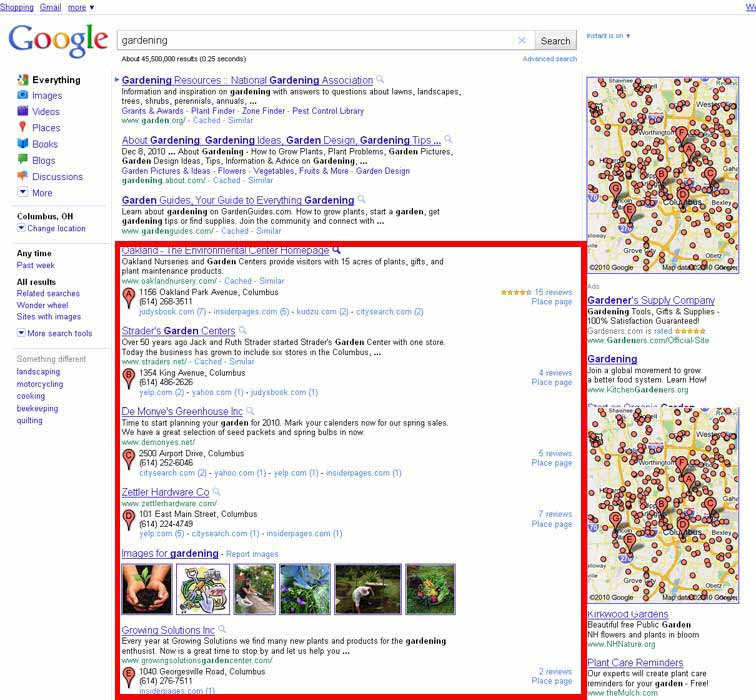 In the example above, there were actually more than 15 listings of one type or another on the search result page.

Probably the best bet is to take whatever numbers you come up with utilizing the math above and knock about 20-30% off of them due to the invariable flaws and differences in search results pages, search types, and the volume of clicks taken by PPC.

Also, set your expectation as such so that you’re not recreating these experiments in a vacuum and then coming to me later if they’re not exactly right. Remember, this isn’t an exact science, simply something that is meant to guide you along the path of understanding how search rankings impact traffic and potentially revenue.